During the London Country Music Week, Country 2 Country traditionally presented the lineup for the festival. Every year, fans pray for Luke Bryan, Blake Shelton and maybe Dierks Bentley supported by all the other big names. To make the story short: they have to pray another year – and maybe even some more years. The festival is just too cheap – and even if the acts likely do not cash in at their best during the London, Glasgow and Dublin weekend, you still have to pay them. Since last year, the European country music community is having a look what the lineups for Berlin and Amsterdam will look alike. Here is my analysis. 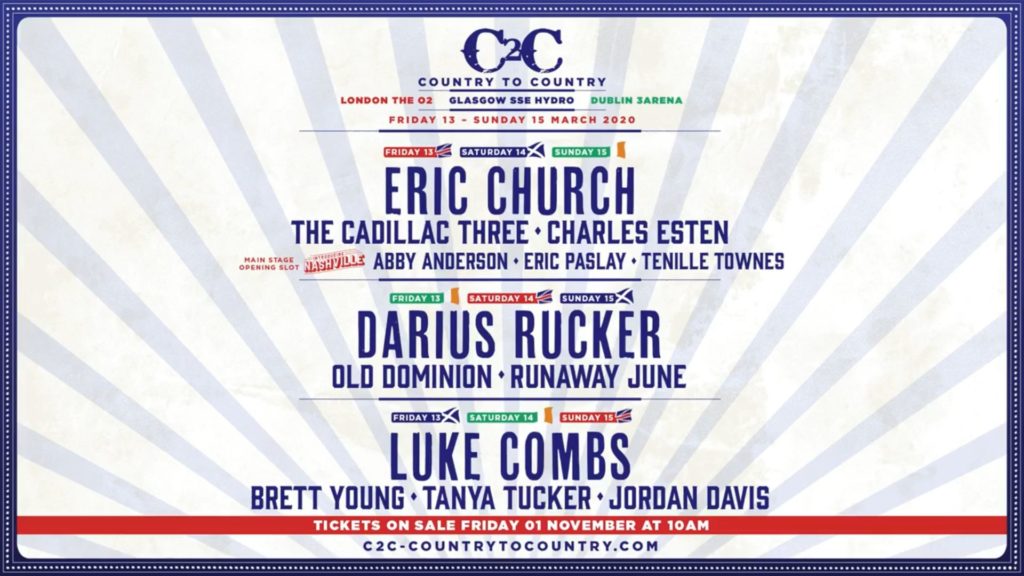 I am focussing on the London schedule, Glasgow and Dublin will be permutations of those. The festival will be opened in the O2 Arena by an Introducing Nashville round of Abby Anderson, Eric Paslay and Tenille Townes. Berlin did the same last year and I felt it was a great way to start the the German debut. Other main acts will be Charles Esten and the Cadillac Three, before Eric Church will finish off the night.

Saturday will more or less have two headliners for me: Darius Rucker is the nominal top act of the day, but Old Dominion are a big act as well. Runaway June are back in London, this time on the main stage.

The “classic country” slot on Sunday will be taken by Tanya Tucker. Jordan Davis will open the main stage, while it reads as if Brett Young be the one to heat up the arena for Luke Combs.

As written above, I feel if you look at realistic economic constraints, the lineup is very good. It will be harder and harder to get the megastars on European stages. My brief thoughts on each artist in alphabetic order:

Overall, a nice nomination. However, I would have loved to see an European act (which likely means: a British one) on stage. The Shires or maybe Twinnie? The Wandering Hearts? The organizers should dare to support their locals in big scale (maybe in the round?)!

C2C in Berlin and Amsterdam

What about Berlin and Amsterdam? They are majorly fed by the same country music feed – here is Berlin: 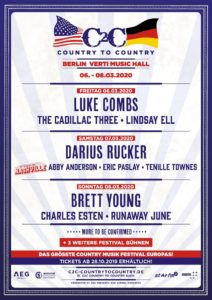 Yes, the Germans will miss Eric Church, Old Dominion and Tanya Tucker (which I feel is big loss), but therefore you get a more intimate venue (with practically no seating…), cheaper ticket prices and likely also cheaper hotel and accommodation. While last year, Berlin and Amsterdam were surprising additions, this time Berlin seems to be a strong option. Lindsay Ell is at least not doing the major stages in the UK and Ireland. Also being on the non-Brexit side of European life may be another argument to more and more go for the Verti Music Hall instead of The O2. Currently, the side events in London are maybe too strong, but C2C Germany is growing rapidly. It might not be realistic to move to the larger arena next door soon (and they would compete with hockey playoffs likely), but the Mercedes Benz-named big oval is definitely a threat for the phone company-branded one in London. 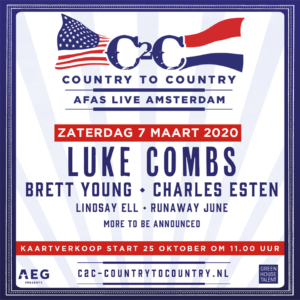 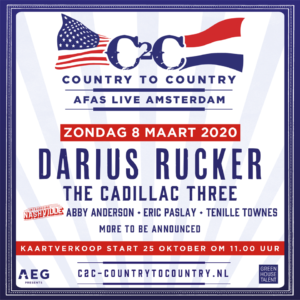 Amsterdam lists the same names, just condensed to two days. The Dutch capital is maybe not the best place to find a cheap hotel, but is also a very popular tourist destination and well connected to Europe. The AFAS Live was seated in 2019 and could give additional comfort.

Here is the overview of dates of the C2C Festivals 2020. I will try to report from Berlin with full Flyctory.com service and give some insights (non-press, just attendant) from London:

There is also a C2C in Australia, which I do not handle in this posting. C2C Logos and program graphics are copyrighted by the organizers