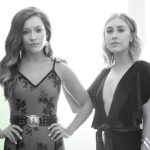 Maddie & Tae released another EP on 18th October 2018. After their career started with a blast, Everywhere I’m Going should the female duo ideally bring back on the musical career track. I was looking forward to listen to new stuff from them.

Maddie & Tae – About The Artists

Maddie & Tae are Madison Marlow and Taylor Dye. They are from Texas and Oklahoma and met 2010 in Dallas. Despite still going to school, they commuted from home to Nashville and formed the a duo initially named Sweet Aliana. In 2014, Big Machine Records rebranded them to Maddie & Tae, Their debut single Girl in a Country Song already blasted the charts. It topped US Country Airplay and placed third and fifth in the US and Canadian country charts. The song has been the most successful band of the duo so far, even though the following single Fly at least made it to the US Top 10. They released two EPs with quite moderate success. However, their 2015 album Start Here ended up in the runner-up position of the US Country Charts. Everywhere I’m Going is their third EP. 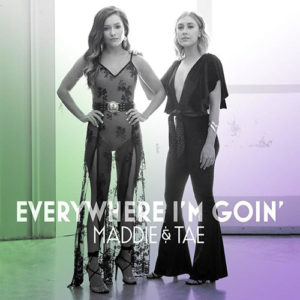 A song about dating and a romance. What I don’t like too much: it feels like the title track. It is a good song, but it feels like a copy.

At least in this track, good old Dierks prevents me from feeling that I listen to the same song again. Lay Here With Me is the best song on the album to me – not just because I like Dierks Bentley. It just has a different character.

A bit more rhythm and speed in this one. Maddie & Tae Ain’t There Yet – what a shame, because the girls were there already where their potential is: on the sunny side of the charts. Brave, but no special arrangement. Nice songwriting but not overwhelming.

With a bit more rock and a bit more of classic country music touch, this track is having a touch of being outstanding. My favorite one without apart from Dierks and Lay Here With Me.

Here is the Spotify widget to the EP:

The EP contains five good songs. Nevertheless, I miss something. Uniqueness, character – a song which I remember after listening to it. I listened to the EP five or six times in a row, doing other Flyctory.com stuff in parallel. I could listen to the EP five more times and enjoy and have a good time. But where is the catchy one? Only the Dierks Bentley track stands out a bit. Really a shame, I like the girls. But there is nothing special – it feels like typical modern country pop nowadays. A lot of artist could perform like that. Not at all bad – but just an average one.