I saw the Black Star Rides some years ago as a support act of Def Leppard and Whitesnake on their European tour. Already at that time, I loved the rock sound of the band. In September 2019, the band released their fourth studio album already. Here is a review of Another State of Grace.

Black Star Riders – About The Band

The band members of the Black Star Riders (or “BSR”) call their project “the next step in the evolution of the Thin Lizzy story”. In fact the founding members of the band, which was formed in 2012, were the current line-up of the Hard’n’Heavy legends, who decided to publish their newest material under a new name. In 2013, the band released their first album All Hell Breaks Loose, which had Top 30 placements in Sweden, Germany and the UK. While the following album, The Killer Instinct had similar placements, the 2017 was more successful in Germany (place 11) and the UK (place 6), but could not keep up in other markets.

BSR – Another State of Grace – Track by Track

The standard version of the album has ten tracks with a duration of 38 minutes. There is an enhanced edition with an eleventh bonus track. 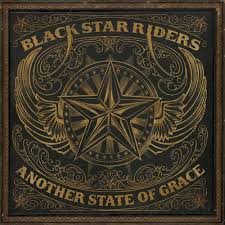 1. Tonight The Moonlight Let Me Down

The first track already shows what you can expect of the Black Star Riders: honest and straight hard rock. A well produced opener of this album

2. Another State Of Grace

The title track is even harder than the first one. Nonetheless, I felt that Tonight the Moonlight let me down was the better track

It may not be the optimum of storytelling and song writing, but Ain’t The End of The World is definitely a hard rock fun track – I like ti!

Another nice hard rock track. Quite melodic and a very catchy chorus. Thus, definitely on the better side of the album.

5. Soldier In The Ghetto

Soldier In The Ghetto does not sound too much like a romantic ballad, ain’t it? Okay, it is a pure hard rock track.

This ballad adds a lot of atmosphere to the album, which just started to feel a bit monotonous. Rockers are just great guys when they show their softer side!

7. Standing In The Line Of Fire

I’m better off alone than in bad company
Why can’t you take the hint, why can’t you let me be
I’m losing control I’ve got no desire
Out in the open, standing in the line of fire

Another good hard rock track by itself. But somehow, it feels so much like other ones before. Where is the variation? Where is the surprise?

Acoustic guitars, a clearer voice – I would not call this track a “ballad”, but it is a nice rock radio song. Did I just ask for variation in the album? Here is the first one of its kind:

9. In The Shadow Of The War Machine

In The Shadow Of The War Machine is harder than the track before, but still a very melodic sound. I like the track definitely.

While I felt a bit bored by the first songs of the album, the second part of Another State of Grace feels much more variable to me. Poisoned Heart has a nice duet-alike chorus interpretation. Good song!

BSR – Another State of Grace – Spotify

You may listen to the full album with that Spotify widget:

BSR – Another State of Grace – My View

When I saw the Black Star Riders promting their The Killer Instinct album, I felt incredible melodies, amazing rock music, a lot of variety. Two albums later (and in the studio, not on stage), I just cannot say I still feel the same potential and fascination for that band. It is a good album, the songs are good individually. But the overall story partially feels a bit too lame sometimes. Towards the end, the album get better again, but overall, it is just average – clearly stating that I expect the songs to be at least one notch better when the guys are out on stage.

The key part of the Black Star Riders Tour 2019 is in the United Kingdom, where the band partially even plays some acoustic album presentations in selected cities. There are also quite some Scandinavian dates. Below is the list of German and neighboring countries tour dates: 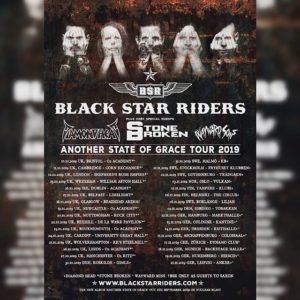